Infections caused by Salmonella spp are common worldwide with the exception of the Nordic countries (Sweden, Norway, and Finland) where the prevalence is low. 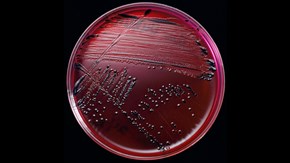 In Sweden the control of salmonella in animals and in feed began in the early 1950's. A slaughterhouse associated outbreak in 1953 when salmonella contaminated meat caused almost 9,000 cases of illness and 90 deaths in humans, clearly showed that salmonella is a serious disease. The probability of eliminating salmonella in the environment is low, so it calls for a continuous work to reduce the presence of salmonella in all stages of the production chain, from farm to fork. Salmonella is a notifiable disease both in humans and in animals, as well as findings of salmonella in feed and food. In humans and animals the bacteria can cause anything from a symptomless infection to severe disease.

Transmission of the infection

Salmonella is predominantly an oral infection. The bacteria replicate in the intestine and cause damage to the intestinal mucosa, with diarrhoea as a common consequence. Regardless of whether an infected individual has symptoms or not, the bacteria can be excreted in faeces. Individuals can become infected through direct contact with an infected human or animal or indirectly through contaminated food or water. The spread of infection is facilitated by the fact that salmonella can survive for a long time in the environment and may even replicate there during favourable conditions.